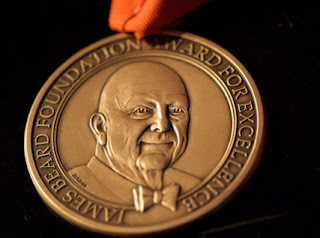 We are proud to announce that the prestigious James Beard Foundation has announced the semifinalists for this year's awards and, in the Best Chefs in America category, Mid-Atlantic Division, the field of twenty includes four Philadelphia chefs, including our own Adán Saavedra!!!

The Philadelphia semifinalists are:

We don't even know who nominated Adán, but we are thrilled and grateful that he is included among such a talented group of chefs.  Five finalists in each group will be announced on March 21, and those chefs will be invited to the Beard Foundation's black tie event at Lincoln Center on May 9, where the winners will be announced.

The Beard awards are like the Oscars of the culinary world, and it's quite an honor just to be nominated.  Read more at www.jamesbeard.org.