We've gotten more requests for this recipe than for any other.  Adán's soups are all good, but this one makes people swoon.  So, here it is, Corn Chowder Paloma! 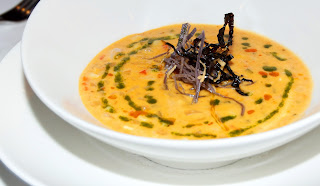 CORN CHOWDER PALOMA(makes 8 servings)5 ears of sweet corn (yellow or white)1 onion1 red bell pepper1 orange bell pepper (optional)1 yellow bell pepper (optional)1 poblano pepper1 ancho pepper (dried)3 large potatoes, preferably Yukon gold, peeled½ quart heavy cream½ cup tequila (doesn’t have to be good tequila)3 tablespoons pinole powder (or substitute approx. 2 tablespoons cornstarch)brown sugarsalt pepper1.      Cut corn kernels from cobs.  Set cobs and kernels aside.2.      Dice two of the potatoes and half of the onion.  Cut the ends from the bell peppers and the poblano pepper, discarding the stems and seeds.  Cut off and reserve the ends of the peppers.  Dice the remaining parts and add to the diced potatoes and onion.  3.      Put half of the mixture from the preceding step into a small saucepan with half of the corn kernels.  Add water just to cover.  Set aside.4.    In a large soup pot, heat a small amount of oil and add the second half of the onion (roughly chopped), the remaining potato (peeled and roughly chopped), the reserved ends of the peppers, the rest of the diced vegetable mixture, the ancho pepper (cut or torn into pieces), and the remaining corn kernels.  Cook at high heat, stirring frequently, for about two minutes.  Remove from heat and flambé with the half cup of tequila.  Once the alcohol burns off, add two quarts of cold water.  Add the reserved corn cobs, bring to a boil, and simmer for five minutes.  Add a half quart of heavy cream, return to a boil and cook for five minutes.  Turn heat to low and simmer until all of the vegetables are fork-tender, about 30-45 minutes.5.    Remove the corn cobs and discard.  Season with salt, pepper and a pinch of brown sugar.  Set aside.6.    Bring the saucepan of diced vegetables from Step 3 to a boil and simmer for 5 minutes once it is boiling.   Add a pinch of salt and a pinch of brown sugar.  Remove from heat and set aside.7.    Purée the contents of the soup pot using an immersion blender, blender or food processor.  Strain the mixture and discard the solids.  8.    Strain the vegetables from the saucepan and add them to the soup.  Adjust seasoning.  Thicken the soup with about 3 tablespoons of pinole or some corn starch dissolved in water.Garnish with blue and white tortilla twigs and ancho pepper strips (thinly sliced corn tortillas and dried ancho pepper, all lightly fried or baked until crisp)Optional:  add shrimp, lobster, crabmeat or chicken.Optional:  sprinkle the soup with basil oil and guajillo-garlic oil.Serve hot.